Classics and Social Justice at the 2021 SCS/AIA 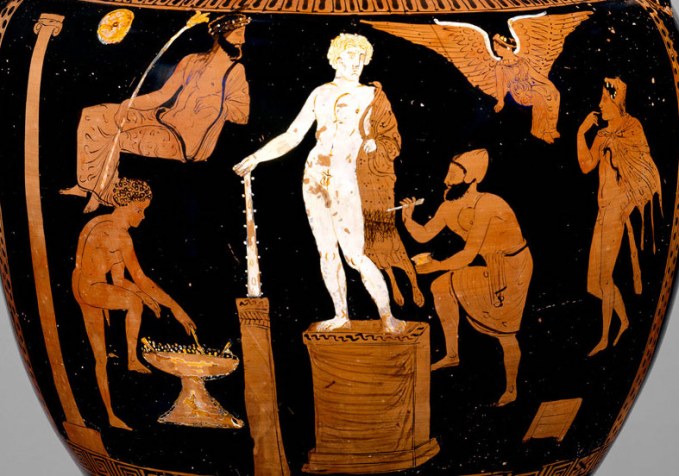 The other day I was listening to an episode of the NPR podcast “Code Switch” covering the historical and political contexts of Charlottesville. The hosts, Shereen Marisol Miraji and Gene Demby, brought on a Republican operative, Alex Conant, who claimed that the president’s refusal to come down firmly against white supremacy could cause irrevocable damage to the Republican party. I listened to this with incredulity, particularly when Conant claimed that he had worked for “a lot of Republicans” and had “never heard any sort of racist sentiment at all.” But when he added that most Republicans “bemoan the fact that we underperform with minority voters,” I was shaken, despite having heard this sentiment from Republicans countless times before. Having just returned from a productive and invigorating workshop focusing on promoting the study of Classics, I had, even more than usual, the exact same concern on my mind.

The overwhelming whiteness of Classics, both faculty and majors, as well as the necessity of disrupting this racial disparity, has been well documented (and now, Denise McCoskey’s excellent essay). With regards to the Republicans, the reason why few people of color vote for them is laughably obvious. When Demby asked why the Republicans had such a hard time obtaining the support of minorities, Conant responded “well, obviously, episodes like this weekend [the white supremacist rally in Charlottesville] do not help with the Republican brand.” Republican policy and messaging is overtly, intentionally racist: it’s pro-police, anti-refugee, pro-gun, anti-welfare, and anti-immigrant. As much as Republican operatives like Conant like to cry ignorance, the fact that 90% of Republican voters are white is not an accident or a mystery. White supremacy is essential to the Republican ethos.

So if, in the case of Republicans, the answer to their diversity problem is obvious, could the same be said about Classics? When we wring our hands and bemoan the scarcity of minorities in our classes and conferences, is there an open secret that we are keeping from ourselves? Is Classics intentionally, explicitly excluding people of color, keeping our towers ivory? I know that some will find this association between the field of Classics and the Republican party hurtful, since most of the Classicists I’ve studied and worked with have been liberal, and I do not mean to call anyone out specifically. Nevertheless, within the discipline, I perceive a sense of complacency with, or perhaps resignation to, the status quo. We know it’s a problem, but I don’t see us making a real, concerted effort to change it.

I find this quote from Mathura Umachandran’s essay extremely telling:

“unless you can credibly defend the idea that black and brown people are either not interested or not smart enough to study ancient Greece and Rome, then structural oppression and discrimination have to be a plausible part of any account for this fact.”

I’ve heard my colleagues wonder, mystified, why Black students don’t want to take their classes, as if the problem lay with the students rather than the professors. Nobody is telling students of color that they’re not interested in taking Greek and Latin, that they don’t want to major in Classics (notwithstanding the convenient myth that minority students are only interested in the STEM fields) – nobody except us. Classics has the advantage of historical perspective; by its nature, Classics is incredibly chronologically, geographically, and ethnographically diverse. Our transhistorical perspective makes the artificiality of the East-West separation obvious: we study authors from modern Turkey, Syria, Libya, and Egypt, as well as modern Greece and Italy. As Classicists, we know that the capital of the Roman Empire was located in modern Istanbul for a thousand years. We know that the works of Plato, Aristotle, Galen, Hippocrates, and Euclid were translated and studied for centuries by Islamic scholars, without whom much of the Greek philosophical, mathematical, and medical thought upon which the myth of Western Civilization is based would have been lost. When we don’t talk about the inherent diversity of Classics more, when we go on and on about the “foundations of Western tradition” instead of pointing out that our field necessarily destabilizes the myth of the west, we are performing an act of active erasure, of intentional whitewashing. When we rewrite the history of Classics to exclude Asia and Africa, when we continue to propagate the narrative of a Western tradition rooted in the Greco-Roman past, we are the ones telling non-white students that Classics is not for them.

In my classes, I make a big deal about the historical construction of racial categories and try to impress upon my students that the Greeks and Romans were not white and should not be considered as belonging to the same racial or ethnic category as white Americans, because modern American whiteness is a construct of our unique, racist, historical circumstances. This message is a response not only to neo-Nazi agitators and political strategists who have appropriated classical imagery and thought, claiming to be the rightful heirs of the Greco-Roman traditions, but also to Bernard Knox’s description of the ancient Greeks as the “oldest dead white European males.” Knox attributes this epithet to “modern multicultural and radical feminist criticism” as a mark of the irrelevance of Classics, but doubles down in support of this characterization with the strange assertion that “they were undoubtedly white or, to be exact, a sort of Mediterranean olive color” (26). What could reveal the situatedness of race more strikingly than the assumption that white and olive are the same color?

Maybe I’m just arguing with a straw man – Knox’s book was published in 1993 and my students are unlikely either to have heard of it or to have encountered the white nationalists of the internet shouting about European heritage. But it is generally true that if my students have heard of Classics at all, it’s been indelibly linked in their minds with whiteness, whether because of images of austere temples and statues or because our society assumes everything old (even imaginarily old) is white. And so I lay out the evidence, every class I teach, for the diversity of the Greek world (Asia Minor was always a part of it! In the Hellenistic period it included North Africa and vast stretches of Asia! The Greeks were certainly xenophobic but not because of skin color!). I teach about how people of color and white women strove to enter academia when it excluded all but upper class white men, how their efforts gradually opened higher education to all people. They found something of themselves in the study of Classics.

But at the same time as I’ve been proselytizing the historical diversity of Classics and Classicists, I am aware that I’ve intentionally elided the equally real historical use of classical precedents to promote slavery, racial profiling, and sexism. In a way, to claim that Classics is, by nature, egalitarian is disingenuous – the discipline’s very name is a testament to its exclusivity. Classics is predicated on the notion of hierarchy, that some things are just better than others. The striving of people of color and white women to gain access to the study of Classics has as its obvious corollary the fact that it was their exclusion that made Classics an elite discipline, a desirable object of study. They were told they weren’t good enough for Classics, and that’s what made them work so hard to be included. The narrative of the Western Tradition is both untrue and true. It’s untrue because there’s never been an unbroken line of descent between Greco-Roman antiquity and modern Anglo-European identity, but also true because over the last several centuries, Classicists have manufactured and sold the world on their idea of Western Tradition, an inheritance they made up from the best and worst parts of the past. This myth-made-real isn’t going anywhere unless we confront it and the damages it has caused.

Talking to our students about the dark side of Classics’ whiteness is much harder and less pleasant than championing its diversity, but I think it’s necessary to be frank about the ways in which the elitism of Classics has been used to exclude and oppress. Perhaps we won’t be able to convince everyone – I don’t think we’re going to be able to “well, actually” the white supremacists; as Mary Beard’s constant Sisyphean battles with racist trolls demonstrate, the acolytes of a monochromatic classical past do not respond well to expertise or to evidence that falls outside of their carefully curated set of talking points. But what we can do is be upfront with our students about the dark history of Classics and our intentional goal of emphasizing the diversity rather than the elitism ancient Greek and Roman cultures. And to get to that place, we need to make sure that we, as educators, are all on the same page. We need to have these conversations with each other

Of course, it’s hard for those of us who are white to talk about race. Growing up in America, we’re taught that it’s racist to talk about race, that we should be colorblind. A lot of Classicists are socially awkward, anyway, and have perhaps internalized a kind of gentility that renders talking about worldly matters like race too gauche. I noticed this when I was on the job market the last two years, struggling over the Diversity Statement, wondering why it was so hard to just articulate that we need more people of color in this field or we risk collapsing into an echo chamber. There’s a lot of frustration surrounding the Diversity Statement – nobody seems to know what it’s for, either on the part of the applicants or sometimes even the hiring committees. Before we even talk to our students, we need to have a conversation among ourselves about why the Diversity Statement is required – we need to see it as more than just an HR requirement, to get to a place where the schools that are hiring, and the candidates they’re considering, are truly, deeply, from the heart committed to decolonizing Classics.

On April 20th and 21st we’re holding an event on Ethical Engagement and the Study of Antiquity at the University of Southern California. At the roundtable (4/20) the speakers will be Nancy Rabinowitz (Hamilton College), Stephanie Balkwill (USC Society of Fellows), Debby Sneed (UCLA). For the workshop (4/21), we’re looking for short papers (5 mins) and/or respondents on topics of ethical engagement. To submit a paper for the workshop, contact Jessica Wright (j.wright@usc.edu). Both the roundtable and the workshop will be live-tweeted @classics_sj. For more information on the Ethical Engagement & the Study of Antiquity event, see the website: http://dornsife.usc.edu/conferences/ethics-antiquity/ 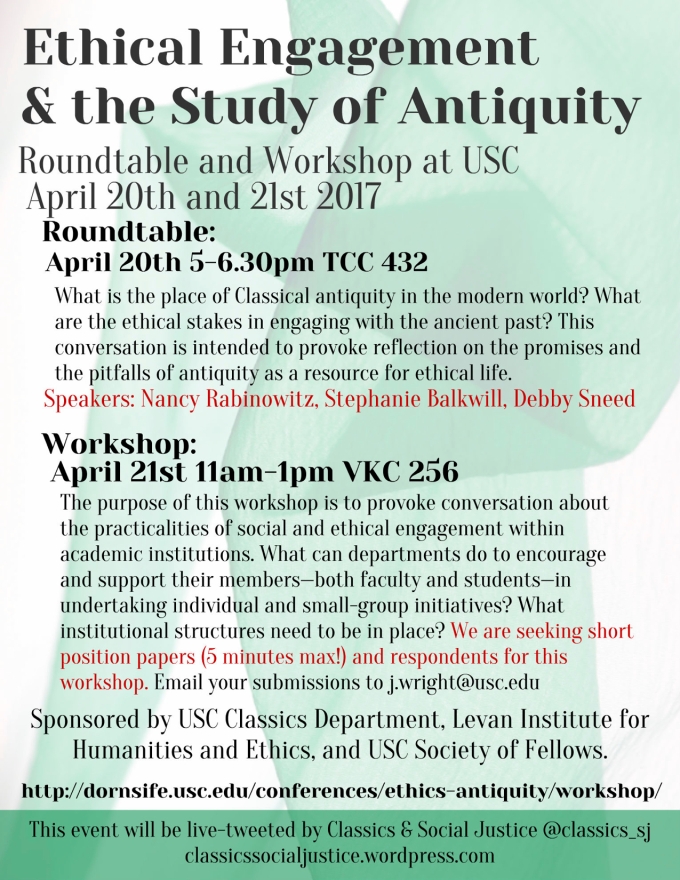