Letter of Support and Solidarity for Black Classicists

Classicists in Solidarity with the Wet’suwet’en First Nation

CFP: (Re)inventing Sappho: New Approaches to Sappho from the Greek Fragments to the Twenty-First Century

Classics and Social Justice at the 2020 AIA/SCS

Author: Joel Christensen (@sentantiq). This is the first in a two part piece on a project to study African American views of Classical education from testimonies archived by The HistoryMakers, which contains thousands of hours of narrative from African Americans in all fields. Part II was written by Zach Elliott (@zbradleyelliott), and can be read here.

searching the database of The HistoryMakers

Usually around the first of every year as I gear up to attend the SCS Annual Meeting, my wife—who is Indian and Muslim—starts to troll me, asking “how does it make you feel that only white people care about the Classics.” I used to bluster; I used to draw on my training in rhetoric, and marshal periodic sentences with rising tricola to defend my field (and myself). But, lately, I have mostly just been shaking, then nodding, my head.

Until this year I taught at a large, public university that served a minority-majority population and enrolled some of the largest numbers of veterans in the country. I cherished this job precisely because of the opportunity it provided to bring Homer, Plato, Thucydides and Sappho to first generation college students. But in the decade I was there, I came to understand that access to this material was limited by a range of institutional challenges: underfunded, undermined public schools at the secondary school level, political hostility, structural prejudices, and, frankly, outright racism.

Our public discourse about education has been dominated by questions of demonstrable economic utility. ‘Esoteric’ fields like the Classics (and History!?) are constantly under siege with questions about how our classes translate into jobs. Many of us spend countless hours crafting arguments about how learning Latin and Greek or studying history, philosophy, and literature provides students with the critical thinking and writing skills to succeed in any job. We collect data on GRE, MCAT and LSAT scores. We make websites and powerpoint presentations. We write these goals into course objectives and assessment plans.

None of this is intrinsically unjust, but by defining the importance of education purely in terms of economic utility, we are acceding to a system that defines the worth of a person in terms of financial potential. Even worse, when we cancel programs or limit what we teach because it will not be useful to a certain economic class, we are complicit in a system that says “this kind of education is not right for these kinds of people because they need to worry about working or ‘more important’ things.” In a country where class is almost entirely inherited and in which race and social class reinforce inequality, this is part of institutionalized racism. When politicians, coordinating boards, and even deans demand that students from certain backgrounds be trained primarily with a view towards future employment, they might truly believe that they have their best interests at heart.  However, the outcome of denying courses of study to some students reifies Classics as a discipline of a leisured elite, impoverishes the range of voices and responses our generation can bring to the ancient world, and enacts a paternalistic delimitation that is racist in effect if not intent.

When I left my first university for my current one, I was excited in almost every way except for one: I knew I was giving up a mission that allowed me to answer my wife’s question honestly. And I know from talking to many people in the field that there is a desire to do more, to advance our field in different directions, and to make our world better at the same time.

Classics is not alone in facing uncertainty in our political and economic climate, but our discipline faces some of the starkest numbers when it comes to racial, religious, and even gender diversity.  One area where we have made progress in the past generation is gender equity, but even there, we have to increase the number of women in permanent and tenure-track jobs.  Moreover, we need to find more ways to give them support and recognize the institutional and structural obstacles they still face. We cannot hope to make significant and long term gains in terms of undergraduate diversity if we do not change the composition of the professorate. 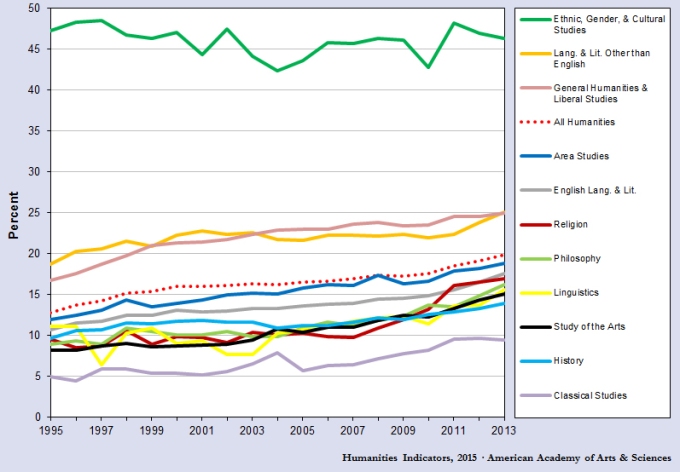 Figure 1, Diversity Percentage for Undergraduate majors. This graph shows that Classics undergraduate populations were in 2013 the least diverse of surveyed fields in the Humanities.

One aspect of the pursuit of social justice in our field must be how we work to diversify our own ranks. The SCS and other organizations have created minority scholarships which can have a real impact on student lives. But we could do more—especially those of us who are in stable positions. Nationally, we can raise money to fully fund underrepresented groups at the undergraduate, graduate, and postgraduate level. (I for one would happily forego an annual meeting or two and dedicate the money I would have spent to this effort). At our home institutions, we must work both inside and outside our departments to hire these PhDs and mentor them. We also need to listen to what they say about their experiences and safeguard their careers as if they were our own.

Figure 2, Percentage of PhDs Held by Women. This graph shows that Classics outperforms other fields in gender representation, but is still not equal.

Further, we must also remember that the way we teach Classics can contribute positively to social justice. It is an act of resistance and a reaffirmation of a universal right to knowledge and independent thought to teach marginalized and disenfranchised communities. (And an act that often requires new pedagogical approaches.) That resistance can come in many forms, but it most definitely means more active outreach by Classics faculty to underrepresented groups.  As Timothy Joseph recently demonstrated, Plato’s Socrates was an inspiration and a metaphor for Martin Luther King Jr. And this was no mere flight of fancy: as Thomas E. Strunk argues, King’s engagement is a powerful testament to a tradition of liberation philology.

As Classicists, most of us are trained to argue for the importance of our field—we can point to its influence on major figures in our intellectual history from philosophers like Thomas Hobbes and John Locke, through artists, authors, dancers, musicians and more. Our luminaries and forebears receive the past and engage in critical dialogues with it. By denying access to the Classics and by not actively recruiting students from underrepresented groups, we bar communities from a conversation and the tools of language that have shaped our politics, religions, and aesthetics. Our duty is not to champion the superiority of one culture over another, but to ensure that no matter what body or class you were born into, you have the opportunity to hear, to understand, and to join this conversation in a meaningful way.

To engage in this type of social justice, we need to get into spaces where students and the public at large can hear us. For those of us who are in traditional educational institutions, this also means we have to figure out how to get new students into our classes. As a discipline, one of our challenges in facing demographic shifts alongside economic and cultural tides of late capitalism and the information age, is, not unironically, a lack of clear and actionable information. How do we even begin to address issues of perception among various groups without a clear idea of what such perceptions are? (As a good friend has told me, the first step is asking.) And, more importantly for a movement concerned with social justice, how do we learn to hear the voices of marginalized groups?

Even the most rigorous classical philologist is to an extent engaged in cultural histories—we should apply some of our academic training to these problems: admirably, classicists like Michele V. Ronnick and Margaret Malamud have already charted the course in this direction. But oral interviews, surveys, and archives allow us the opportunity to listen to personal testimonies of African Americans (and others). Archives like those collected and curated by The HistoryMakers, moreover, also provide a searchable database of transcripts.

With a small grant from the office of the Provost at Brandeis University (dedicated entirely to paying a graduate student fairly to do the archival research), our project is to collect and analyze what African Americans say about the Classics in the late 20th century and afterward. The testimonies are mixed—while many interviewees do position classical education as a vehicle of liberation, many also see it as an extension of elite values and power. The oral testimonies, we suspect, will echo many of the conclusions reached in Malamud’s recent book African Americans and the Classics (2016). At the same time, they attest to a deep diversity of responses to Classical material.

Admittedly, the aims of the project are rather modest given the magnitude of the challenges we face. But I try to imagine the aggregate effect of sharing this material online through my website and twitter feed. And, more importantly, I try to take seriously the potential exponential effect of teaching Classics from a social justice perspective: if only one graduate and one undergraduate a year leaves my classroom with the ability to communicate the importance of Classics for all people and to understand social justice from a diachronic perspective, then over the years they will influence many more lives. Finally, and perhaps optimistically, I imagine the combined effect of my colleagues all over the country doing the same thing.

Thanks to Suzanne Lye for constructive criticism of an earlier draft. Special thanks as well to Shahnaaz for having the patience and kindness to teach me what it means to be someone else for the last 20 years.